“Mertztown Peter” Trexler built his home circa 1789.  Initially, the home consisted only of the smaller structure at the back of today’s mansion.  The family lived here until the Federal style mansion was built; the original home was then converted into a summer kitchen.  The roof of the mansion was raised in 1860 to create a full third floor and a mansard roof was added. 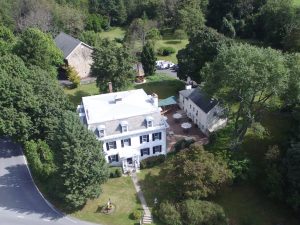 Aerial photo of the Main House, Cottage and Barn

Peter’s grandson, William, made more changes to the property by adding a general store alongside the mansion, which also housed the Longswamp Post Office, and a bank barn behind the mansion.  Known as “The Colonel” by having served in that capacity in the state militia, William was a prominent figure in Longswamp social and political life for around 60 years.  After his first wife, Mary Ann, died, William married Amelia Schall.  Legend has it, Amelia arranged for The Colonel’s General Store to be a stop along the Underground Railroad.  A tunnel, which does exist, was built between the main house and the store to serve as a temporary hiding place for runaway slaves.

During the 1980’s, the property became a bed and breakfast,  and has been welcoming guests ever since.  In 1995, the original trusswork in the barn was replaced following a partial roof collapse.  At that time, it was renovated to include bathrooms in the event space as well as the addition of a guest suite in place of one original horse stalls.  Today, the main house still has much of the original craftmanship, such as the magnificent three-story walnut staircase, pegged wood floors, 10 foot ceilings and much more.  The general store and post office, which are now known as the cottage, display the original hand hewn ceiling beams.